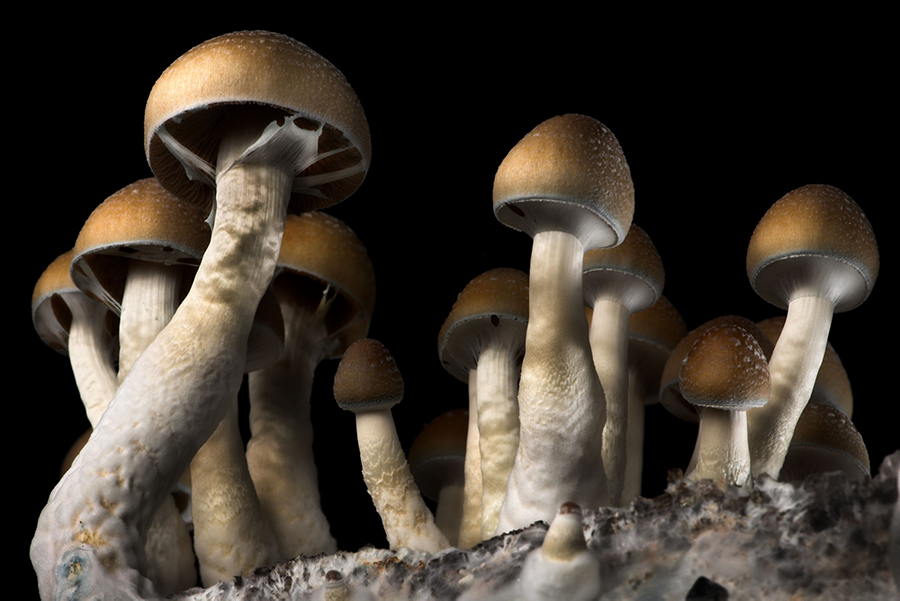 Even for those disorders such as anxiety and depression for which psychiatric medications exist, the development of new traditional psychopharmacology agents has slowed.((Schenberg, Eduardo Ekman. 2018. “Psychedelic-Assisted Psychotherapy: A Paradigm Shift in Psychiatric Research and Development.” Frontiers in Pharmacology 9 (July). https://doi.org/10.3389/fphar.2018.00733.))

To expand the arsenal of treatments for various psychological disorders, some researchers are now looking at psychedelic medicines as a treatment alternative. And most recently, researchers have begun to examine some of these as potential treatments for eating disorders.

Psychedelics, sometimes referred to as hallucinogens, are substances that alter perception, mood, and cognitive processes. They can cause hallucinations: seeing or hearing things that are not real. Psychedelics can occur naturally in trees, plants, and fungi or can be manufactured in laboratories.

The use of hallucinogenic plant medicines in ancient indigenous populations predates written history. LSD, or lysergic acid diethylamide, is a hallucinogenic drug that was first synthesized by a Swiss scientist in the 1930s. Psychedelics were studied as treatments for mental disorders in the 1950s and more than 1000 clinical papers were published in the 1950s and early 1960s.((Foldi, Claire J., Paul Liknaitzky, Martin Williams, and Brian J. Oldfield. 2020. “Rethinking Therapeutic Strategies for Anorexia Nervosa: Insights From Psychedelic Medicine and Animal Models.” Frontiers in Neuroscience 14. https://doi.org/10.3389/fnins.2020.00043.))

However, in the late 1960s LSD and marijuana (which is sometimes classified as a hallucinogen) were embraced by youth protesting the Vietnam War and were consequently scapegoated by the mainstream culture as contributing to the corruption of youth.

In reaction, strict laws were passed to prevent their use. The Controlled Substances Act of 1970 placed LSD and other psychedelics known at the time onto Schedule 1, the most restrictive category of drugs. This classification made them virtually impossible to study clinically and effectively ended any significant research into the pharmacology and medical value of psychedelics for more than 3 decades.((Nichols, David E. 2016. “Psychedelics.” Pharmacological Reviews 68 (2): 264–355. https://doi.org/10.1124/pr.115.011478.))

After a lull of several decades, changes in political attitudes and advances in science and technology allowed research to begin again on psychedelics in the 1990s.((Multidisciplinary Association for Psychedelic Studies)) Most recently, there has been a renewed interest in their use for psychiatric illnesses and studies are once again underway.

The exact mechanisms of action of psychedelics are not fully understood, but it is theorized that they significantly reduce activity in the brain’s default mode network (DMN). The DMN are the habitual pathways of communication between brain regions. Just like on a snow-covered hill, we tend to follow the tracks that are already there. Over time, it becomes difficult to take any path other than the ones already established.((Carhart-Harris, Robin L. 2019. “How Do Psychedelics Work?” Current Opinion in Psychiatry 32 (1): 16–21. https://doi.org/10.1097/YCO.0000000000000467.))

The DMN appears to be particularly overactive in certain mental health conditions including depression, anxiety, and OCD. By reducing activity in the DMN, psychedelics may provide a break from deeply ingrained psychological patterns and allow for the setting of new tracks. They may increase brain neuroplasticity and creativity.

How does this apply to eating disorders? Cognitive flexibility is impaired in people with anorexia nervosa, which may stem from an overactive DMN. Hence, researchers hypothesize that psychedelics may be an appropriate treatment method.

How are Psychedelics Used in Psychiatric Treatment?

It is in these integration sessions that patients solidify insights gained and identify action plans.((Garcia-Romeu, Albert, and William A. Richards. 2018a. “Current Perspectives on Psychedelic Therapy: Use of Serotonergic Hallucinogens in Clinical Interventions.” International Review of Psychiatry (Abingdon, England) 30 (4): 291–316. https://doi.org/10.1080/09540261.2018.1486289.))

Psychedelics are considered relatively safe and, unlike opiates and stimulants, they do not lead to addiction or dependence((Nichols, David E. 2016. “Psychedelics.” Pharmacological Reviews 68 (2): 264–355. https://doi.org/10.1124/pr.115.011478.)). Psychedelic assisted psychotherapy differs from conventional psychiatric treatment in that rather than correcting neurochemical dysfunctions in the brain on a daily basis as most traditional psychiatric medicines do, psychedelic-assisted psychotherapy causes modifications in brain functioning and conscious experience. This in turn can lead to meaningful experiences that create emotional, cognitive, and behavioral changes.((Schenberg, Eduardo Ekman. 2018. “Psychedelic-Assisted Psychotherapy: A Paradigm Shift in Psychiatric Research and Development.” Frontiers in Pharmacology 9 (July). https://doi.org/10.3389/fphar.2018.00733))

Psychedelics and Their Potential for Treating Eating Disorders

Four particular psychedelics have been the subject of most of the recent psychiatric research and have been or are being investigated in terms of eating disorders—Ketamine, MDMA, Psilocybin, and Ayahuasca.

Ketamine has been used in higher dosages as an anesthetic for decades. In lower dosages, it can temporarily modify consciousness. It has been studied for the treatment of depression, obsessive-compulsive disorder, and post-traumatic stress disorder. Over several decades, research has shown that ketamine has antidepressive properties.

Esketamine nasal spray, a derivative of ketamine, has been separately approved by the FDA for treatment-resistant depression.((Schenberg, Eduardo Ekman. 2018. “Psychedelic-Assisted Psychotherapy: A Paradigm Shift in Psychiatric Research and Development.” Frontiers in Pharmacology 9 (July). https://doi.org/10.3389/fphar.2018.00733)) Trials of ketamine-assisted psychotherapy are also underway and may increase the effectiveness of the treatment. Ketamine may not have been investigated specifically for eating disorders yet, but patients with depression may already be accessing it.

MDMA is MethylenodioxyMetamphetamine is commonly confused with the street drug “ecstasy” (also known as “molly”). However, these illegal products are often substitutes that contain no actual MDMA, and may contain only substitutes.

MDMA has been designated a breakthrough therapy for PTSD by FDA, a status that can lead to expedited approval. Therapeutic results with severe treatment-resistant PTSD patients were significant with approximately 70% of participants no longer qualifying for the diagnosis 12 months following treatment.((Schenberg, Eduardo Ekman. 2018. “Psychedelic-Assisted Psychotherapy: A Paradigm Shift in Psychiatric Research and Development.” Frontiers in Pharmacology 9 (July). https://doi.org/10.3389/fphar.2018.00733))

Currently underway is an open-label, multi-site Phase 2 study of the safety and feasibility of MDMA-assisted psychotherapy for eating disorders. This is a multi-site study of individuals with anorexia nervosa restricting subtype and binge-eating disorder. The study is taking place at three sites including Vancouver, Canada, Toronto, Canada, and Denver, Colorado.

Psilocybin is the active ingredient in what are commonly known as “magic mushrooms”. Psilocybin has been studied in patients with depression, anxiety, obsessive compulsive disorder, and addiction((Schenberg, Eduardo Ekman. 2018. “Psychedelic-Assisted Psychotherapy: A Paradigm Shift in Psychiatric Research and Development.” Frontiers in Pharmacology 9 (July). https://doi.org/10.3389/fphar.2018.00733)). Psilocybin received a breakthrough designation from the FDA for individuals with treatment-refractory depression.((Knatz-Peck, Stephanie. 2019. The Renaissance of Psychedelic Therapy. The Los Angeles Psychologist Magazine, Summer 2019. https://www.lacpa.org/the-los-angeles-psychologist-magazine)) In 2020 Oregon became the first state in the country to legalize psilocybin for medical use.

A current study is underway to explore the safety, tolerability, and efficacy of psilocybin for individuals with anorexia nervosa.

Participants will receive a single 25 mg dose of psilocybin along with psychotherapeutic support, which includes preparation and integration sessions surrounding the experience. This trial is being conducted in Baltimore, Maryland and San Diego, California.

Researcher and psilocybin therapist Stephanie Knatz Peck, Ph.D. who was involved in a psilocybin-assisted trial for the treatment of depression and now is working on the anorexia study said this:

We are excited to evaluate the usefulness of this therapy for anorexia nervosa, particularly given the lack of good treatment options currently available. Our UCSD study is a small pilot study evaluating the safety, tolerability, and initial efficacy of psilocybin-assisted therapy for adults with anorexia nervosa.”

Ayahuasca is a traditional Amazonian psychoactive plant-based tea used in rituals by indigenous leaders and as part of religious ceremonies. Its use has spread to other parts of the world. People who drink ayahuasca usually report powerful visions and mystical experiences. It is usually drunk in traditional-style shamanic, religious ceremonies.

Participants typically drink a small glass of the tea in a ceremony that can last between four to eight hours. They may experience nausea, vomiting, sweating, and altered states of consciousness.((Renelli, Marika, Jenna Fletcher, Kenneth W. Tupper, Natasha Files, Anya Loizaga-Velder, and Adele Lafrance. 2020. “An Exploratory Study of Experiences with Conventional Eating Disorder Treatment and Ceremonial Ayahuasca for the Healing of Eating Disorders.” Eating and Weight Disorders: EWD 25 (2): 437–44. https://doi.org/10.1007/s40519-018-0619-6)) Research on ayahuasca shows it might be helpful for mental health problems including depression, anxiety, and addictions.

People with eating disorder histories have been participating in ayahuasca ceremonies. One retrospective study of participants by La France and colleagues concluded that “ceremonial ayahuasca drinking may have promise as an alternative treatment.” The majority of participants surveyed reported significant insights about their illness and believed that ayahuasca has led to reductions in eating disorder symptoms. They also reported that the experience nurtured their self-compassion.((Lafrance, Adele, Anja Loizaga-Velder, Jenna Fletcher, Marika Renelli, Natasha Files, and Kenneth W. Tupper. 2017. “Nourishing the Spirit: Exploratory Research on Ayahuasca Experiences along the Continuum of Recovery from Eating Disorders.” Journal of Psychoactive Drugs 49 (5): 427–35. https://doi.org/10.1080/02791072.2017.1361559))

A Word From Verywell

It should be clarified that the evidence for psychedelics for the treatment of psychiatric disorders does not involve their recreational use. When used properly with psychotherapy, they can be a tool to help people change the way they look at themselves and the world. Participants who use psychedelics recreationally without the therapy integration are not likely to experience the same benefits. If you are considering whether psychedelic-assisted therapy may be helpful to you, please consult with a health professional.